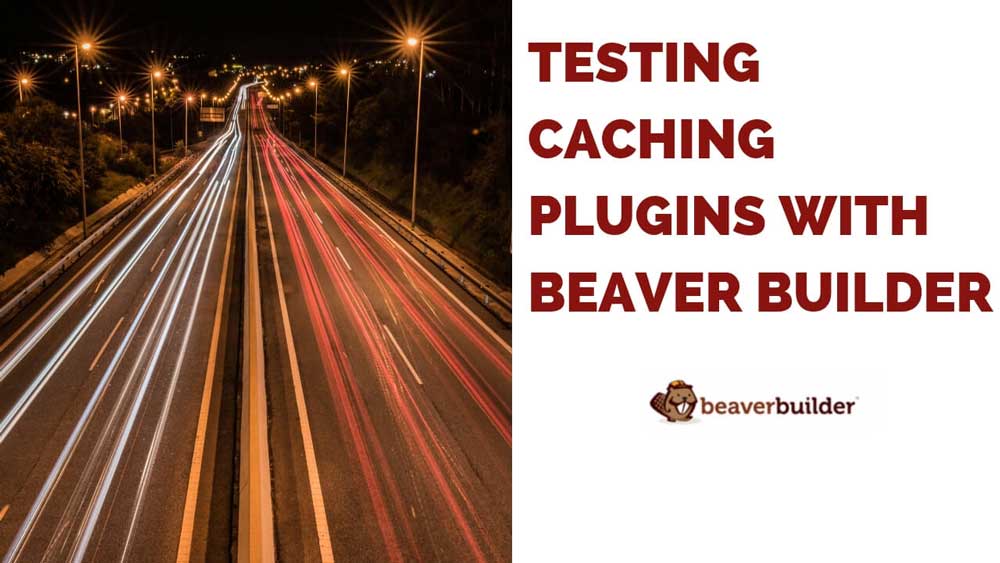 Beaver Builder is another drag and drop page builder popular in the market. There are a few things that make Beaver Builder such a desireable page builder. First the code it pops out doesn’t leave short codes. So even if you stop using Beaver Builder, the code left over won’t be messed up. This is especially important if you are using it to create blog posts.

The other thing that is great about Beaver Builder is the white labeling. If you run an agency then the ability to have “Your Agency Builder” is a great way to lock your customers in. As wordpress becomes more advanced, the sites built with it can slow down and no matter how good they are coded, page builders do slow them down a bit.

There are multiple ways to speed up your website. Some of these are just not viable for most people. Use a lighter theme. This is great if you are a coder and can make them yourself. But we are using a page builder for a reason, lack of coding skills and speed to market. For non coders, the best route for speed include:

That hosting your paying $2.99 a month just is not gonna cut it. Especially if it was recommended by gurus. I have 4 hosting companies I recommend. Two are traditional CPanel providers, one is managed wordpress and the third is a newer solution to the market that sits in cost between cpanel and managed hosting providers.

This part right here is usually the best route to increase the speed of your website. I have been surprised how often websites are created with full sized images directly out of a phone or dslr. These 2MB and larger pictures take for ever to load, especially on mobile.

A CDN can be a good route for speeding up websites but it does take a little more effort and technical understanding. I have found a well designed site (in my humble opinion) benefits less from a CDN. I have not really used them myself but the bigger your site gets, the more advantageous they get.

Without getting into the technical details, content management systems are slower because a site renders the page on your browser every time you come to the page. What a caching plugin does is save the last render of the website and holds it in a file so when someone comes to your site, it just servers the pre-rendered page making the site that much faster.

Caching plugins run into issues sometimes with page builders because those page builders take up a lot of resources. I found that Visual Composer is a beast compared to the stand alone platforms. I am curious how it will work with Beaver Builder so lets get started.

Disclaimer: I think it is important to let you know, I am not a programmer, network genius, CISO, or other tech provider. i am a marketer that knows enough to maybe be dangerous. That being said I have learned enough to get good results and I am going to share them with you. So tech folks, please be kind.

I have four recommendations for good quality hosting. I use a reseller program from a company called Veerotech as it gives me the most flexibility. The issue is they do not have phone or chat support, only ticket. If you need that flexibility but need more hands on support, then check out A2. If you have a single site and want fast and speedy, WP Engine is the way to go. If WP Engine is out of your budget, then check out Cloudflare which sits on top of individual VPS’s at Amazon and Digital Ocean. Check out the links below to see what they offer.

I use a reseller hosting package from a company called Veerotech. This allows me to set up individual CPanels for each testing site. They use CloudLinux, Litespeed and all SSD servers. The data center is in North Carolina so not entire ideal for me in Hawaii but ti works. If you are using different hosting, your results might be different.

I created an initial build with Beaver Builder using the free Astra theme. I was not able to get a hold of the Beaver Builder theme so the results could easily be different. I then created 5 pages, set up the menu and installed the typical plugins I use which include:

I then cloned it to a variety of test sites to quickly test different caching plugins.

A thought: What I wonder is if the caching I am doing is really affecting the Astra theme instead of the builder because I am getting very similar responses to when I tested Elementor which also used the Astra theme. If anything that just tells me how well Astra is coded

The first thing I do after cloning everything is test the initial website to get a baseline speed to compare against. I ran sped tests 5 times and it ran from 1.9  to 2.2 seconds. I decided 2.1 seconds was the best representation of a non-cached version of this Astra and Beaver Builder site.

I tested about 9 caching plugins. One is a premium plugin, the others are either free or have a freemium element that allows you to upgrade for more features. Each of the plugins had to have:

With the changes in WordPress especially with Gutenberg, I thought it important that stuff not updated in the last 3 months not make the cut. IN fact on a previous test when I tested a plugin that had not been updated in 6 months, it performed horribly given how easy the caching was for other caching plugins. Also, given how WordPress is a target for hackers, having old plugins on your site is just a non-starter for me.

WP Rocket is normally the first plugin I test on these sites. The reason, it normally performs in the top three. It is a premium plugin which means there is technical support if you need it. And, if you are using managed wordpress hosting, it works on managed wordpress hosting like WP Engine. At 1.4 seconds it performs quite well. Anything under 2 seconds is considered a good load time. And if you are using WP Engine, then this is the plugin to buy.

WP Fastest Cache is another plugin that performs very well. It is not as pretty as WP Rocket but it is also a freemium model that has a free and paid program. The only issue I had on Divi sites was if I cahced a page that had a form, either email optin, or contact form, the forms would not work after they were used one time. That being said, here are the results. 1.3 second load times is quite good. Again, the only thing I would test is how do your forms perform with it. In Divi, this was an issue I had.

WP Supercache is designed by the folks at Automattic that run WordPress.com. It is regularly updated and has a ton of downloads. It is not as flexible as some other plugins but is simple to set up. At 1.3 seconds it performs really well.

The folks over at WPMU developed this plugin. If you have ever used WP Smush It, you know the folks. On my last test they performed very well compared to how they performed two years ago. At 1.4 seconds, it reaches what others do as well. I did not test the premium version.

My hosting company uses Litespeed as a drop in replacement for Apache. Litespeed has created a caching plugin designed to work with litespeed set ups. If you are using Veerotech or A2 (with its Turbo mode) then this test will be relevant. If you are using others, maybe not so much. I was able to get 1.3 seconds of load time with this cache. I have never used it on a non-litespeed site.

W3Total Cache has been around for a long time. It is probably the most flexible of plugins but with that flexibility comes difficulty setting it up. I would never recommend it as a plug and play solution but if you are willing to slowly test, then yes, go ahead and use it. I was not able to test the minification which used to cause issues. In that case I used autoptimize and it performed well. But even using the basics it performed really well. 1.2 seconds which is what I got to.

Cache enabler is a simpler plugin to use. Unfortunately it did not perform as well as the others and only got me to 1.5 seconds load time. It is still is a good number and better load time than most wordpress websites but the other plugins are better.

The Breeze plugin is created by the folks over at Cloudways which is one of the recommended hosting providers I detailed above. Unfortunately it also performed at 1.5 seconds so not as good as the others. That being said, it is possible it performs very well with Cloudways.

Simple Cache is… well.. simple. It only has three options. Turn it on, how long the cache lasts before being purged and whether you want to Gzip Compress the files. And with that simplicity you get a very respectable 1.4 second load time.

As I mentioned earlier, my performance figures might be skewed by using the Astra theme and I just have to say, congratulations to the folks over at Astra for making a well coded theme. That being said.

If after using those plugins you are not under 2 second load times, then you need to consider a different hosting provider in my opinion.