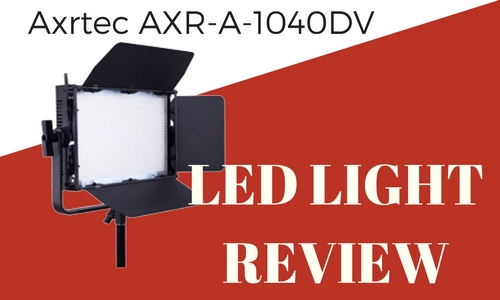 If you are doing video and work in a tight space, LED lights can be a god send for indoor recording. For a while now I have used those big florescent light boxes that are cheap but I hate using them. First of all, they are flimsy, second, they take up so much room and third, they create a lot of heat. I live in Hawaii and don’t need any extra heat. Because of their size I always had a hard time positioning them properly.

I have been looking at LED lights for a bit but was procrastinating since the ones I wanted were almost $700 for a single one. Instead, these new AXRTEC led lights came on sale and I jumped and bought two. For $100 more than the other light, I got a light that puts out close to the same output as both the soft boxes and the more expensive led.

These lamps have 1040 individual daylight (5600 Kelvin) LED’s. It puts out the equivalent of 1,000 watts of lights which is a lot of light. In addition, the light quality is a CRI (Color Rendering Index) of 95+ which is fantastic. That is how you avoid the greens and oranges you sometimes get in some videos or with
cheap LED’s. These also have metal, adjustable barn doors and the yoke is a high quality adjustable which I appreciate versus the light boxes when I want to bounce light off the ceiling.

I found the lights easy to position, easy to move around and they don’t fall over like the big softboxes. One of my softboxes still has 2 broken lights from falling over in a light wind. They create pretty  much no heat yet output a nice white light.

They actually come with carrying cases as well so they are very portable. The only thing it doesn’t come with are stands so you have to either use ones you have or purchase new ones.

If you are in the market for new LED to replace the cheap softboxes, give these a chance as I currently see them at Amazon for less than $500 a piece.