My Love and Hate Relationship with Yelp 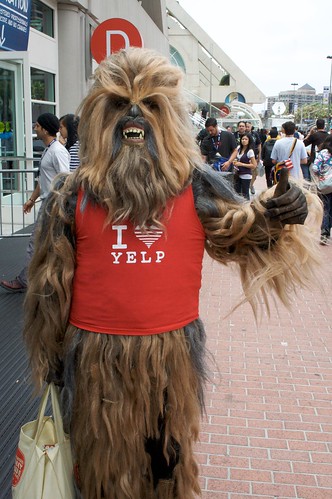 Whether you are a business or a consumer, there is a good possibility you have used Yelp, as a consumer to find or review a local business and as a local business to see what people are saying to you.  With more and more people using cell phones, discovery sites are becoming more important and it is the reason Google is scrambling to redefine themselves with their purchase of Zagat and Frommers.

Filtering of Reviews:  If you go into a business Yelp listing, you can see their reviews and then what are called their filtered reviews.  Yelp “Filters” reviews from those that do not post that often or for a variety of secret reasons.  Legitimate positive reviews can be filtered just because the user is not that active.  Unfortunately, Yelp very seldom filters negative reviews.  And because people are more prone to complain then they are to compliment, the reviews get skewed towards negative.

Elite User Focus:  We talked about the filtering of reviews on Yelp.  If you are an Elite User, Yelp kisses your butt.  I understand why Yelp does this, they are trying to encourage engagement but unfortunately, many legitimate positive reviews get filtered. Elite reviewers tend to think they deserve special attention because of their status.  I have one customer (Pet Store) that got a bad review from a pain in the butt Elite users because the owner wouldn’t let her play with a puppy she had no intention of adopting.

Expensive:  Yelp eventually calls a local business trying to sell them on their advertising program.  It is very expensive compared to what you can get from competing programs such as Google.  They also require you to sign 6 to 12 month contracts.  Month to month would allow more people to try out the service but unfortunately I think many customers would not re-up.  I tell my local customers the 300 to 600 a month they quote you can be used on better forms of promotion.

Other platforms that are more fair:  Yelp has a lot of competition in the market that they need to contend with.  For Restaurants (what most people use Yelp for), there is Urban Spoon and Google (that owns Zagat).  Zagat reviews for fine dining restaurants are much more trustworthy given that it is professional reviews versus self proclaimed foodies.

For all that I complain about Yelp, it is still a fantastic discovery mechanism for local businesses, especially restaurants, bars and other food establishments.  Searching within the Yelp site is easier then Urban Spoon for several reasons.  Yelp allows you to search by neighborhood.  Here in Hawaii, Urban Spoon included outer island listings (I live in Oahu and it shows Maui restaurants) when I only need local ones.

Zagat is great but is only for fine dining establishments.  It is also only allows you to search by city instead of by neighborhood.  If I want to find a restaurant in Makiki, I can’t really do that with Zagat.

Does Google need to worry about Yelp?

There is a lot of talk of Google being worried about Yelp with consumers moving over to mobile devices.  The thought being, people will go right into the Yelp App to look up a local business.  At the moment, Google doesn’t need to worry.  I do not like Yelp’s iPhone app.  I still use Yelp but I end up doing a Google search and heading over to Yelps main site as I do not like their App.

Does Yelp need to worry?

Yes, Yelp does need to worry.  There are a lot of competitors nipping at their heals, and some of them are quite successful at their particular models.  FourSquare in particular is trying to take on Yelp for business discovery and I put a lot of my customers on Foursquare if they have the right demographic.

Zagat is the premier destination for fine dining in the world.  I still go to Yelp from time to time but I look at every single review with a grain of salt.  I have a good nose for who is spewing BS versus a legitimate review.  Urban Spoon is owned by IAC interactive, that multiple local business portals.  In addition, Urban Spoon has started up an iPad reservation system that could give it scale in the restaurant business.  Finally, you can’t forget OpenTable.  As the largest online reservation system out there, they have a huge user base.

Yelp is at a crossroad right now.  They have good participation with 78 million unique visitors a month and 30 million reviews (Yelp SEC Filings), yet they still have not made a profit yet since going public earlier this year.  They have the consumers (at the moment), they now need to start courting the businesses by making it as beneficial to the business as it is to the consumer.