My predictions for eBay and PayPal after split 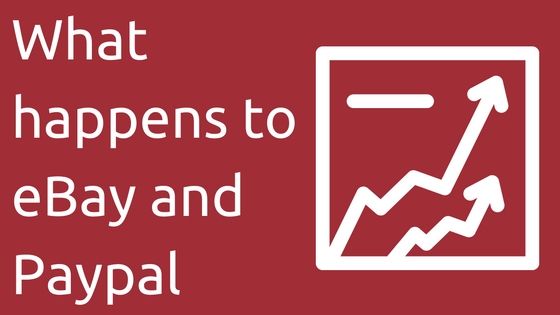 Many of us use both PayPal and EBay for running our online businesses and after almost 15 years, PayPal was spun off as a separate company on Friday July 17. While this will be a big plus for my stock (at least in the short run) I thought it an interesting exercise to give my predictions of what will happen to the companies.

What happens to PayPal

Paypal will continue to be a player in the online payments space with a substantial lead and because of network effects, little to worry from traditional players in the space. The biggest risk I can see right now is with apple pay but from what I have seen, that has been touted as more an offline payment function versus online.

Will Amazon us PayPal?

Many analysts have speculated that now it is separated from eBay, Amazon will start taking PayPal as an alternative. I will tell you right now, it WILL NOT happen. I can’t ever see Amazon letting an alternative payment system on their platform and for one reason only. Amazon wants people to use it’s own payment system because of the abundance of data they can pull from it.

And while they can still pull some data from a PayPal payment, it is much more valuable that it go through their own payment systems. Amazon is a prodigious data miner and they can use it to help them source products or upsell their customers.

One advantage that PayPal had as part of eBay was the use of the substantial free cash flow eBay generated. PayPal acted like a bank in many respects even though technically (in the USA) they are a money transmitter. While they are a bank in Luxembourg that was more about its ability to market off the eBay platform than anything.

It is why PayPal was spun off we zero debt and a large 5 Billion dollar cash balance that was actually generated by the eBay ecosystem. Ebay ended up keeping the balance sheet debt because of its large free cash flow, close to $2 billion dollars a year.

So what happens to PayPal?

PayPal, in my opinion, will not remain independent very long. The most logical buyers would be the payment networks like Visa, Mastercard, American Express or Discover. Visa buying it would cement their control of the payment market but Mastercard could build itself with PayPal as a subsidiary.

There has been talk about Google or Apple buying them but I am not to sure. Apple won’t. Apple could have used its huge iTunes ecosystem to create a juggernaut of a payment system and instead went a digital wallet route. I can’t see them buying PayPal. Google could buy them since they have stalled in the payment business and could bring a mobile ecosystem to PayPal’s already powerful mobile apps.

PAYPAL Prediction – Capital One will buy PayPal. Capital One has been making moves into the SMB and consumer space quietly. Last year they bought Americommerce putting them into the e-commerce space so combining those two would make them huge in that market.

What happens to eBay?

The transformation almost overnight of eBay is a bit shocking. In a matter of a week, they spun off PayPal and sold their enterprise unit (a mistake in my opinion) after essentially shutting down their ecommerce business and losing Magento. This leaves them with their core “marketplace” business. And while there is competition ahead, eBay still generates tremendous free cash flow, close to $400 million a quarter.

I don’t know how profitable their classified business is but it could very well sustain itself just like craigslist, except, it’s not craigslist. I don’t know what will happen to the classifieds business.

Stubhub has been an interesting purchase for eBay. It has grown itself quite well and has become an able competitor to Ticketmaster and the others. It has built its partnership business as “Official Reseller” and because tickets are easy, it is a decent margin business. Most likely, I see Stubhub as a stand alone business. But, can eBay afford to do that? When is the last time you bought a ticket on eBay? You don’t, you go to Stubhub. If they were to spin it out like PayPal, I would love to own Stubhub on its own.

That leaves the original marketplace. I can’t see another tech company buying them. There are only two logical thoughts. One, someone like the Newspapers, buy eBay for the sheer free cash flow they represent. Or, Alibaba buys them given that half the sellers I see are shipping directly from China.

The only other option I see are a series of mergers to consolidate the marketplaces business. This might include a purchase or merger with Rakuten, Etsy, Bonanza or some of the others. This could also let them exploit the cross border marketplace.

A once great eBay

In some respects, it saddens me to see what has happened to eBay. It is essentially back to where it was in 2001 with little prospects to be excited about. eBay was a pioneer in many things including influential court cases that determine how we shop online.

To quote a former boss, I blame the arrogance of management. In a desire to protect their gross margins at all costs, the company stopped investing in its core business, which allowed Amazon to come in and steal its thunder. To often I have seen companies run by “Strategy” people who won’t invest in their businesses and then when the well finally runs dry