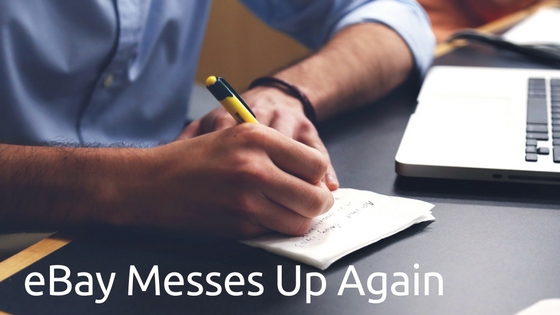 Ebay recently announced they were selling their eBay Enterprises business to a private equity consortium. Ebay Enterprises consisted of Magento and a business that ran the websites for large offline businesses trying to go online. More often than not this included handling multichannel fulfillment.

Now, eBay admits the business is under pressure with many companies (like Toys R Us) going it on their own and that makes sense. But what eBay missed is the ability to transform that business into one that would make competing with Amazon that much easier.

Amazon has been eating eBay’s lunch for some time now. Forget the fact that Amazon is more expensive than eBay and Etsy and the others, they are still converting sellers and buyers over from eBay. There are two reasons for the conversion.

Buyers trust Amazon a lot more than eBay. And while eBay has tried to increase the trust by siding more often with buyers over sellers (chasing sellers away) buying on eBay can be a crap shoot at times. Add on top of this there is less friction in the buying process with Amazon compared to eBay which is one advantage Amazon has by using their own check out model.

Fulfillment by Amazon allows sellers to send their products to Amazon warehouses and have Amazon handle the fulfillment. The beauty is, all those products qualify for Amazon Prime which means free 2 day shipping. That means even the lowliest seller that has never sold a thing in their life, can piggy back on the trust of Amazon and their dirt cheap shipping. They even get to use Amazon’s UPS account to ship product into the fulfillment center.

Combine Amazon’s trust with FBA, you have a model that is hard to beat. Because Amazon is handling the pick/pack and shipping, there is never an issue of a buyer saying they they never got their product. Stuff ships quite a bit quicker and sellers get paid their money quite a bit quicker.

Ebay had the expertise to start running even a test warehouse to compete with FBA. And while many would say, well the margins would be quite smaller, not necessarily. Remember, eBay is still not taking inventory, they are still providing a platform. And FBA is not free. Amazon charges storage, pick, pack and shipping fees back to the seller.

Running a warehouse for your customers would also reduce the risk of fraud, make returns easier and reduce the friction for sellers to get up and going and started. And because you are not required to use UPC codes, you can still sell private label quite easy.

Finally, buyers would be able to combine orders from eBay just like they do with Amazon. Most people don’t care who the seller is, as long as it is “Prime” eligible. Adoption would be easy as well as eBay could provide better listing prices or tweak their algorithm to favor fulfilled by eBay in the search.

Ebay has done something similar before

If you have ever bought a vehicle from eBay than you have participated in the Vehicle Protection Plan (VPP). The VPP was set up to gain buyer trust by protecting them from getting a vehicle that is “significantly not as described”. The program was outsourced to a company that specializes in these programs and the cost was charged to the Motors business. It was a resounding success.

Instead, eBay took the easy route and just sold it at a loss instead of trying to set themselves up to compete in the long run.