Why the Sales Tax Debate is really an Assault on Small Business by National Retailers! Part 2 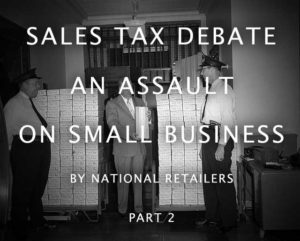 In Part 1 of this article (seen here), we talked about the hypocrisy of states and national retailers on the sales tax debate.

Amazon caused an uproar when around Christmas they started giving discounts for those using their price comparison application.  I think this is a calculated plan by Amazon to force discussion on sales tax that will actually help Amazon.com substantially if they get their way.  If online retailers are forced to collect sales tax in every jurisdiction they make sales, here is who wins and here is who loses.

While I like Amazon they are not forcing the sales tax issue because they are a good corporate citizen but because there is an opportunity for them to profit enormously from it.  Right now Amazon allows third party retailers to sell on their site.  I even do this with one of my coffee sites.  Amazon takes up to 15% of the gross revenues for the honor of selling on Amazon.

If small retailers are forced to submit sales tax in all jurisdictions Amazon wins in several ways.  First, there will be many online retailers that just will throw in the towel, meaning less competition.  But that is not why Amazon will win.  When I first started selling on Amazon, they had no way to charge sales tax.  Now, they have added that functionality in the last few months.  How much you want to bet that Amazon will “streamline” sales tax filings for its third party sellers.  Moving third party sellers from their own sites to that of Amazon’s platform could see a huge increase in gross revenues.

National retailers are losing sales because their shopping experience and customer service sucks.  Like any legacy business in decline they rather legislate their oligopoly and monopoly then fix their broken business model.  With small business spending more time doing sales tax filings and less marketing, they will be able to further push small business out of the way.

Less choice, less competition and higher costs because of it.  Instead of chasing after big ticket sales tax states and municipalities will have to hire tons more people to chase after sales tax  for thousands of small retailers.

You are still going to lose business to online sales, but instead of specialty retailers or your own online store, it’s just going to be Amazon.com, Walmart.com, Bestbuy.com and Verizon.com .  But with less competition from small nimble retailers, the big boys can concentrate on taking your business.

While Amazon primarily has established businesses as third party retailers, most of eBay’s sellers are individuals.  Can you imagine what happens if they have to start doing sales tax filings?  Many will just abandon it.  The states will also start subpoenaing PayPals records to get a list of sellers to chase for sales tax.  This will force people off the PayPal business to smaller merchant processors that the states won’t target as fast.  Finally, with the purchase of Magento, eBay has bet on the independent retailer.

With less people opening or maintaining ecommerce accounts, the hosted ecommerce companies will have to grow in different ways or spend a ton of money on streamlining sales tax to keep those customers on their platform.

As you can imagine, the only ones that win from this are the large national retailers.  Everyone else loses.  We would be better off closing tax loopholes that cost states a lot of money versus wasting resources going after small stores.

What can you do?

I know many small retailers are worried about losing their sales to online retailers.  The simplest solution is to open your own online store.  It is so simple these days to do it.  You have a distinct advantage with established relationships with your suppliers, access to fully functional platforms and a ready built customer base.  This also allows you to work with your suppliers to drop ship a variety of items you might not carry in store.  If you need help we even offer a very affordable service to get you up and running.  You can find us here Online Store Help.

Talk to your state representative to make it illegal to give large retailers property tax exemptions.  The idea that we have to give exemptions to large retailers is silly.  But it can’t be done at the local level since the retailers are very good at playing municipalities off against each other forcing a local cities and counties to provide property tax relief so the city next to it doesn’t get the store.

Before anyone gets excited and warn me about all the great things sales tax brings, don’t be mistaken, I believe in paying my fair share of taxes.  In fact I do pay a lot of taxes including use, income, excise and business taxes to multiple jurisdictions.  Let’s just level the playing field so no particular business has an unfair advantage.